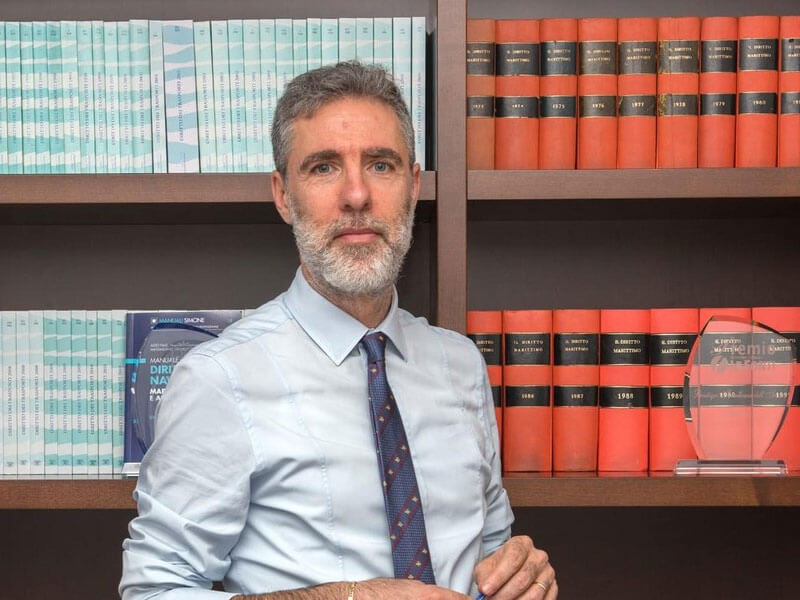 Massimiliano Grimaldi, founding partner, is a member of the Order of Lawyers of Genoa and is one of the greatest experts at a national level with regard to maritime and inland navigation and tidal waters law, commercial port law, tourist port law, yachting law (yachts and superyachts), competition law, Antitrust and state aid, administrative and tax disputes related to transport and concessions.

Massimiliano Grimaldi is also highly skilled and has significant experience in drawing up regulatory and administrative acts in the sector, in preparing proposals for laws and amendments as well as in the subject of parliamentary work, and in this respect, he is also a point of reference for trade associations, businesses and institutions. Massimiliano Grimaldi has been representative in the sector of maritime transport and inland navigation for many years at the Legal Office of Ministry of Infrastructures and Transport.

Massimiliano Grimaldi is also visiting professor for Yachting Law at the University of Genoa, Economics department (DIEC), Research Fellow of navigation IUS-06 at the above-mentioned university, author of books and numerous articles published by specialised magazines, and he is frequently called to speak at national and international conventions. Massimiliano Grimaldi is also a member of the editing board of the magazines Il Diritto marittimo and Lextrasporti, and member of the Italian Association of Maritime Law as well as the International Propeller Club Port of Genoa.

Massimiliano Grimaldi has been awarded the title of Professional of the year – Transport Category at the TOP LEGAL INDUSTRY AWARDS 2020, following a rigorous selection to allow just the most deserving lawyers to compete in front of the Technical Commission.

In 2018, Massimiliano Grimaldi was recognised Legal expert with high level of specialisation by the Transport Regulation Authority, and in 2017 he was named winner of the Lawyer of the Year (Boutique of excellence) Transport Law award in the LE FONTI AWARDS 2017, a famous event in Milan that has awarded professional excellence in the market of legal services for years, and which is also organised with the high patronage of the European Commission.

Massimiliano Grimaldi founded and is president of the Italian Association of Inland Navigation Law (AIDNI), the members of which include lawyers, accountants, businesses, insurance companies and public administrations.

Massimiliano Grimaldi is also member of the Legal Committee of the International Association the Rhine Ships Register (IVR) based in Rotterdam, a prestigious international association founded in 1874 and operating in the transport sector on the main network of inland waterways and tidal waters of Europe.